Paleo meets permaculture, all in my tiny garden

After the chickens ate all my seedlings I replaced the bird netting with chicken wire, and so far so good. However I'm only just seeing stirrings of seedlings so I have decided that my chickens are going to be shut away most of the time now, until everything is a bit more established and able to survive them. I decided to take the opportunity to mulch the bed and as it was windy I threw some twiggy bits on to hold it down. It was a heart breaking process not least because I had used the last of things like beetroot seeds and not wanting to buy more I had to sow some second choice stuff instead.

This weekend we've had both some beautiful weather and a bank holiday. I was feeling impatient. I wanted more stuff growing and I wanted to spend some time in my garden. My courgette and squash seedlings had died (my last squash seedling died following a cat deciding my self watering container with my seedling in looked like a great place to toilet), so I wanted to buy some replacements because it wasn't looking like any of my other seeds were going to germinate. My local garden centre didn't have any squash or courgette plants so I will seek some out at a local plant sale at the end of the month. I ended up buying some dwarf french beans and beetroot plugs. What then followed was me changing plans, doing some quick research, and creating a new bed almost completely from scratch.

This is the original bed, replanted with some beetroot added. You can't tell from the picture but there are now many small seedlings pushing their way up. So it seems that I've only been put back a few weeks, so all is not lost. 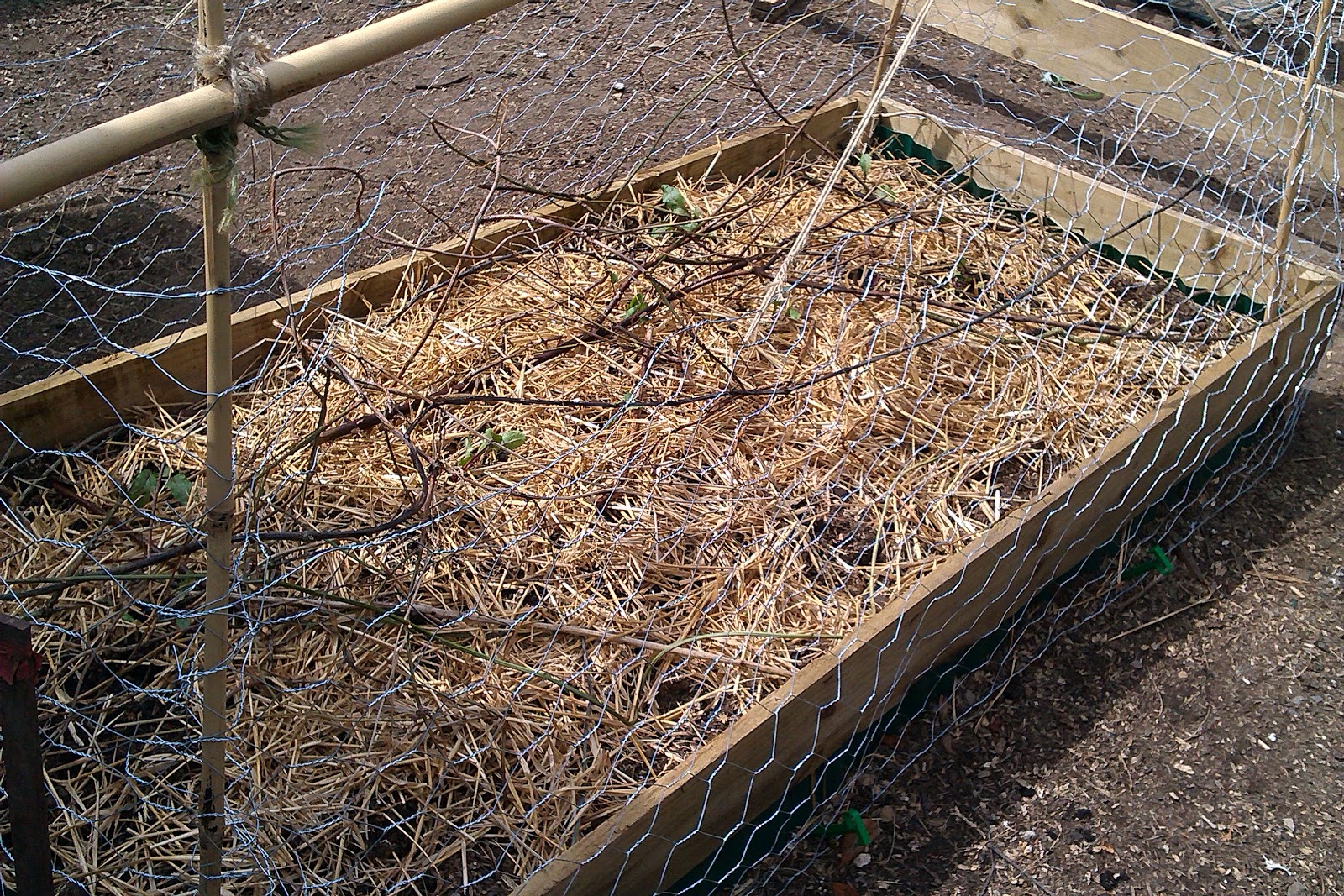 As well as my larger beds I also have one small bed that is 1m x 1m. It has been sat for quite a long time now kind of propped up and around a couple of roses. It's had some old mini fence across it and the chickens have enjoyed roosting on it. I've been worrying about the fact that I only have one compost heap and no room for more. I have been reading a bit for the last couple of weeks about keyhole gardening and hugelkulture. Both styles of beds are low maintenance and help get extra nutrients into the soil. I had half a big bag of sawdust which had been sitting round for about six months. It had been sat round because it was chicken bedding but it started to spoil so it was left to be slowly added to the compost heap. Whilst it was waiting I had been adding personal nitrogen to it to help break the wood down. Hugelkulture uses wood as part of a style of sheet mulching, and keystone beds include a compost heap and compensate for the loss of space by having a slope up to the basket/bin. I had paper for the bottom layer, I had wood for the next, I had well rotted cow manure for the next and plenty of compost for my top layer. Everything was ready to go. 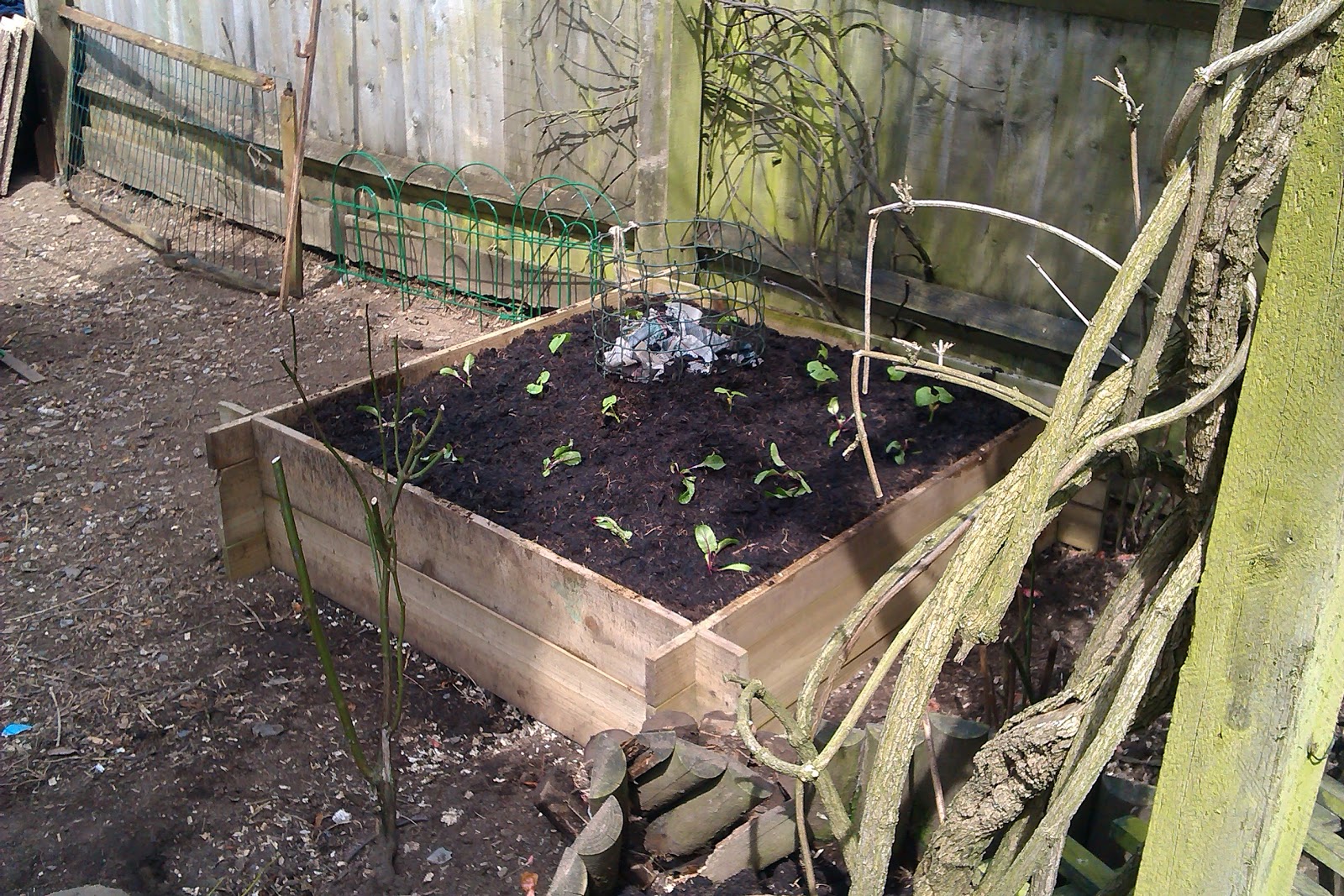 I kind of wish I had taken photos as I went, but some of the work was done after it started to get dark, so they wouldn't have come out very well anyway. This is the bed after it was filled and planted. There's paper in the central basket as it helps keep the compost out and will itself rot down. I added some pak choi, lettuce and nasturtium seeds as well, before making the whole thing chicken proof (hopefully). As it's a poly culture bed everything is fairly tight together as I will thin out as everything matures. French beans are also known as green beans and whilst they have bean in the name what you eat is mostly pod rather than bean so are ok in a paleo diet. They also provide valuable nitrogen. Legumes are a simply and useful way to add nitrogen to the soil (something other veg badly need) but obviously they aren't included in a paleo diet so green beans are a good choice. Next year I might grown runner beans for a similar reason, or I might just feed the beans to the chickens. I don't have to eat everything that my garden produces, if I feed it to my chickens it's still producing food (and with the chicken they also produce manure, which is also more nitrogen).If I didn't have chickens then I would be getting ready to give away lots of beans.

All the beds have been planted with some permaculture principles in mind. Polyculture, forest gardening (different layers), keyhole, hugelkulture, plus providing flowers (calendula and nasturiums) for insects such as bees and food for my chickens. It's about seeking the most food from a small space for least effort whilst giving something back to the world around me. I have seen the argument that the world is only able to support the numbers it does because of industrial agriculture is an argument against paleo being able to be long term or something many people will be able to do. A pocket permaculture farm in my tiny little garden is an example that we can feed people without GMO, without crazy fertilizers, and without carving up yet more land to drain of nutrients. Nutrients and sustainability are important things aspects of paleo. If you don't agree with me, then I suggest you take it up with Robb Wolf.


I don't have space for livestock larger than chickens but that's ok because I can source pretty good meat anyway. This garden should give me fresh, nutritious and tasty veg in the weeks and months to come. I'm really looking forward to those salads.